April 1940 was the month seeing the quietness of the “Phoney War” coming to an end: Germany invaded Denmark and Norway on April 9, 1940 in what was code-named Operation Weserübung.

But before taking a look into the North, here is the only entry on my grandfather’s diary covering April 1940:

So there had been a first (?) casualty, a loss of human life, even before the fighting had started for II./AR 84. 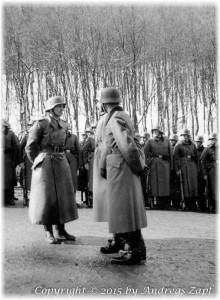 That early in the war, there was time for a burial with full military honors as it seems – at least one of the photos going with the diaries shows the lined-up formation of his comrades in uniform, something that will change over the course of the war when location and circumstances change and burials will become more common and will happen under less peaceful conditions.

According to my grandfather’s noted, Kretschmar had the position of a Kradmelder – a Despatch Rider on a motorcycle. The circumstances of his death are currently unknown – an accident of some sort or illness may be the reason. But that is speculation at the moment. It was, however, important enough for my grandfather to include this note into his diary while other events, such as the already mentioned Operation Weserübung, are not receiving a single word.

Speaking of a Kradmelder, there also is a photo of one in the collection of my grandfather – just to give you an idea.

This one is interesting – not so much for the Krad in the front but for the building in the back: the letters show the name of the place called Gartenrestaurant Entenpfuhl. Out of curiosity, I googled it (knowing it was somewhere near the city of Aachen) – and I found it, the place still exists.

Despite the lack of entries in the diary, some of the photos are showing what the unit was busy with in April 1940. 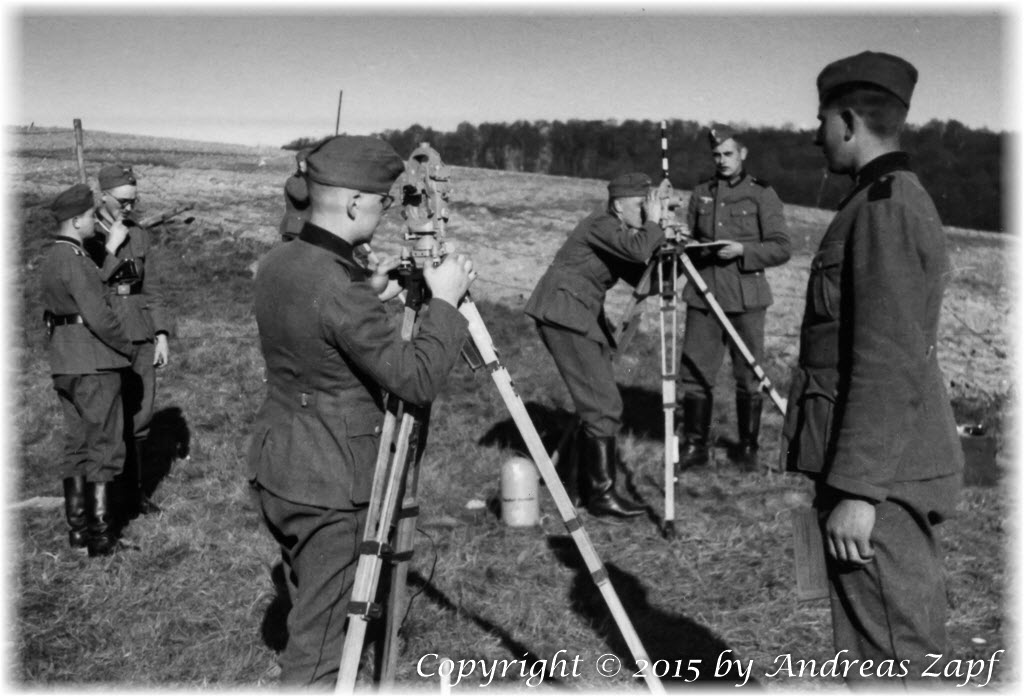 As the snow had melted away, the gun crews as well as the other parts of the unit were busy exercising and improving their skills. My grandfather, posted to Vermessung und Einschiessen (Surveying & Zero-in), of course was with the survey crews – the photo above shows them practicing with the Theodolites. 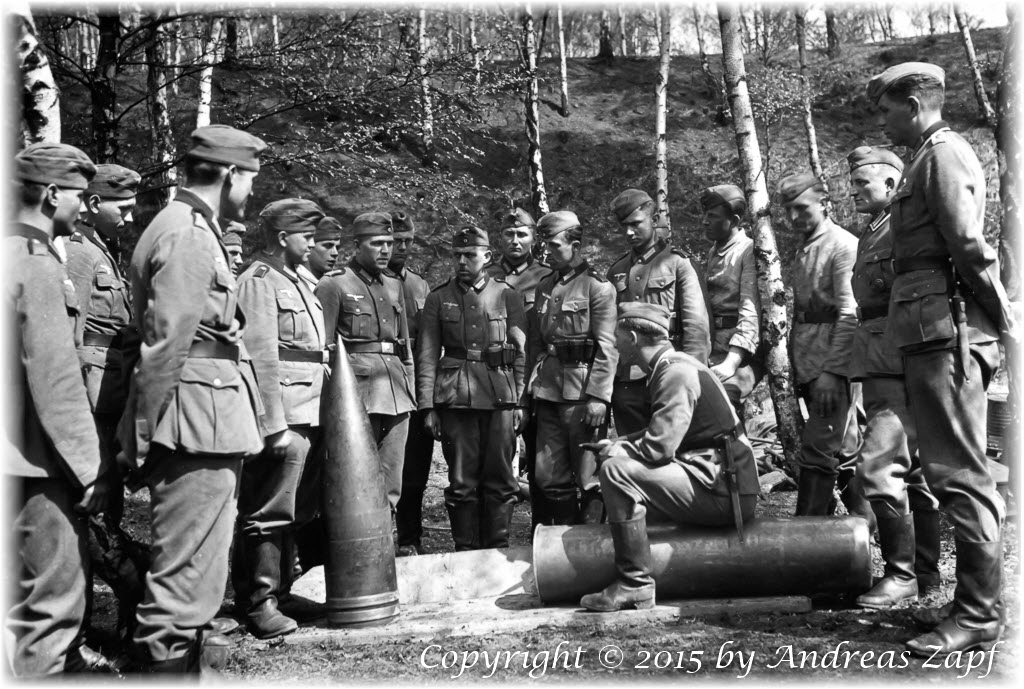 Likewise, there was training and exercise on the guns themselves. It is not explicitly noted anywhere but we can safely assume that the crews where drilled in setting up and taking down the heavy guns.

What this means is described in Issue #138 of the Waffen-Arsenal by Wolfgang Fleischer: when “on the move”, each one of the 24cm guns was loaded on four specialized tow trucks: 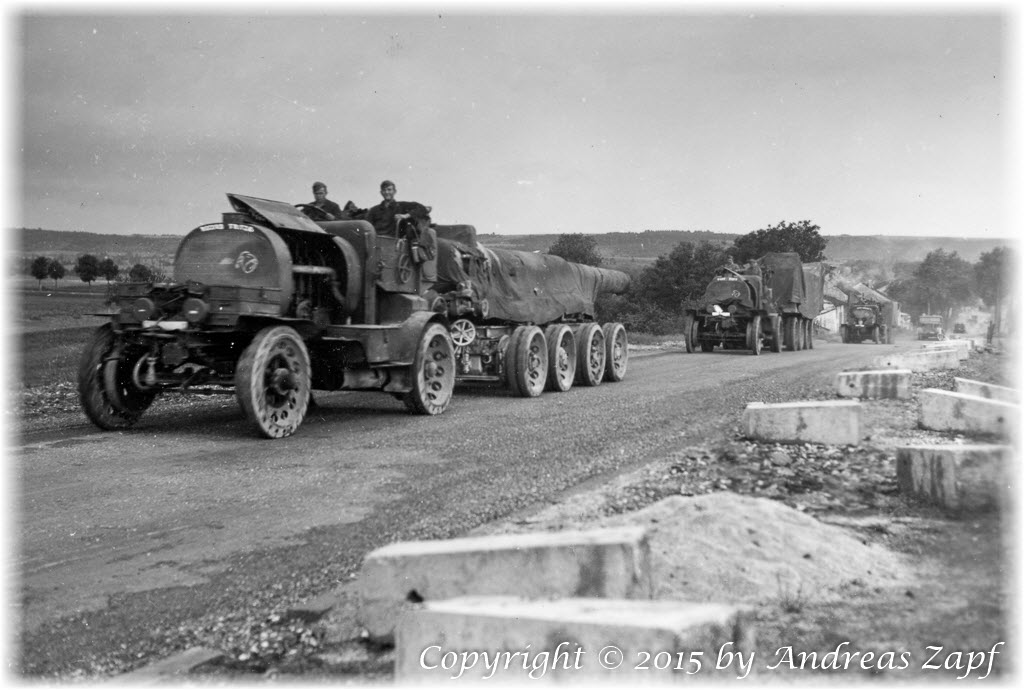 The photo above, again, is stepping a little bit “ahead”, it is actually taken in May 1940. But it shows three of the four trucks on the road: the closest one is the Rohrwagen – the transport for the gun’s barrel. The two following trucks are the Bettungswagen, the two trucks carrying one half of the gun’s foundation each. The fourth load is not on the photo – the Lafettenwagen carrying the gun’s carriage is either further to the front or elsewhere…

Now, setting up the gun for firing involved as a first step the excavation of a pit for the foundation: 50 cubic meters of earth had to be excavated and the pit had then been clad with wood. The two foundations were then placed in the pit. Once the foundation was laid, the gun’s mounting was put in place and finally the barrel was mounted. It is said that it took anywhere between 14 and 28 hours to set the guns up and about 3-6 hours to take them down and load them on their trucks. With a total weight of 86.000 kg or 190.000 lb., this was anything but an easy job…and once set up, the gun was ready to be zeroed in and trained. 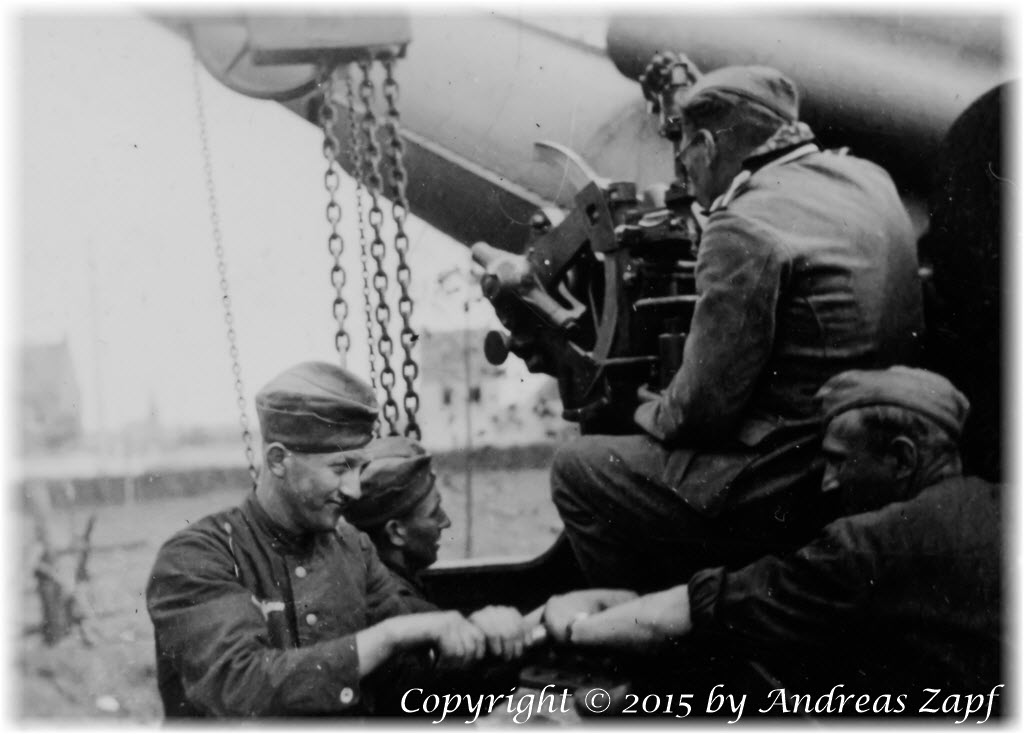 I doubt the exercises in April 1940 actually included firing the gun – the need for secrecy was far to big to allow a large gun like this one to make a hell lot of noise… and of course, you wanted to save the ammunition. But I assume the crews were busy even without.

This entry was posted in Personal Diary Entry. Bookmark the permalink.