With the occupation of Poland completed, the time between October 1939 and December 1939 is one of relative quietness. The period is known as the “Phoney War” – except for some minor exchanges (and a half-hearted attempt of the French Army on the Saar Region in September) not much was happening in the West.

In the East – which at this time meant occupied Poland – things also had started to quiet down. In the North-East, the Soviet Union had attacked Finland in what is known as “the Winter War”. This war would last until March 1940 and then end with the Moscow Peace Treaty. 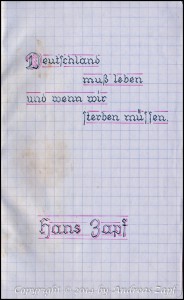 Looking at my grandfather’s diaries, the first one is the one in best shape – you can tell that is had been written in a time where he was allowed frequent and carefully worded entries.

The cover of this first diary is a sentence taken from the poem Soldatenabschied [2]engl.: “A Soldier’s Farewell”, written in 1914 by Heinrich Lersch:

The literal translation is “Germany must live, even if we must die.”

These, as mentioned above, are not my grandfather’s words but a popular line from the already mentioned poem. The line is also used on some German War Memorials and has always produced a heated discussion, especially as it’s writer, Heinrich Lersch, had been a a member of the NSDAP, and was also seen giving speeches to the members of the Hitlerjugend and other Nazi-Organizations.

The one thing to be kept in mind is the following: the poem has been written in 1914, before Adolf Hitler had risen to power. As such, it originally is more in line with the patriotic, partially heroic, attitude at the beginning of World War I than with the latter use as a “battle cry” amongst Germans in the years to come. Although, of course, the use was intentional and the meaning transferable.

“Fall Gelb” – The changing Battle Plans for the War against France

On a historic side node, the War against France should have started far earlier than it actually did – it was planned for January 17, 1940. However, sometimes fate plays crude jokes even in the face of a horrible war and such was the accidental “landing” of a German Messerschmitt Bf 108 “Taifun” in Belgium on January 10, 1940. On board: a part of the plans to attack France via the neutral Netherlands and Belgium! However, the incident should not be overrated: the original plans for the attack on the to-be Western Front were by no means undisputed in the German High Command.

The original plan for the War in the West was drafted in October 1939 by members of the German Army High Command – mostly the Commander-in-Chief of the Army, General Walther von Brauchitsch and General Franz Halder. Their plan was very similar to the attempts on the Western Front in World War I – a strong push through the Netherlands and Belgium with a subsequent encirclement of most of the French Army in a counter-clockwise move. A plan, that not only in Hitler’s eyes lacked any surprise element…

Unlike World War I, where the leading edge of the fighting force was the infantry, the war against Poland had proven the strength of a new force: the tanks. As a result, General Erich von Manstein, with the support of General Heinz Guderian, drafted an alternative plan: instead of putting the main force of the attack into the north (where the allied forces would surely expect the move as it was a re-incarnation of the World-War-I-strategy), von Manstein suggested a surprise attack with strong Panzer-Armies further to the south, through the Ardennes.

It is safe to assume that the aspect of a fast-moving element of German Tanks and mobile Infantry was mostly formulated by General Heinz Guderian: pushing past the enemy main forces and breaking through to the Channel coast would take the French and British Forces by surprise and cut off their supply lines. The so called Sichelschnittplan, (engl. “Manstein Plan”) finally became the attack plan of choice. However, the War with France was delayed until May 1940.

A World War I Gun in the Service of the Wehrmacht

One thing that makes II./Artillerie Regiment 84 (II./AR 84) interesting is its armament: the unit was the only one in the Wehrmacht equipped with the Czech-built 24 cm Kanone M.16. The guns – there were a total of 8 built between 1916 and 1921 – were taken by the Wehrmacht after the Munich Agreement in early 1939. The gun became known as schwere 24 cm Kanone (t). 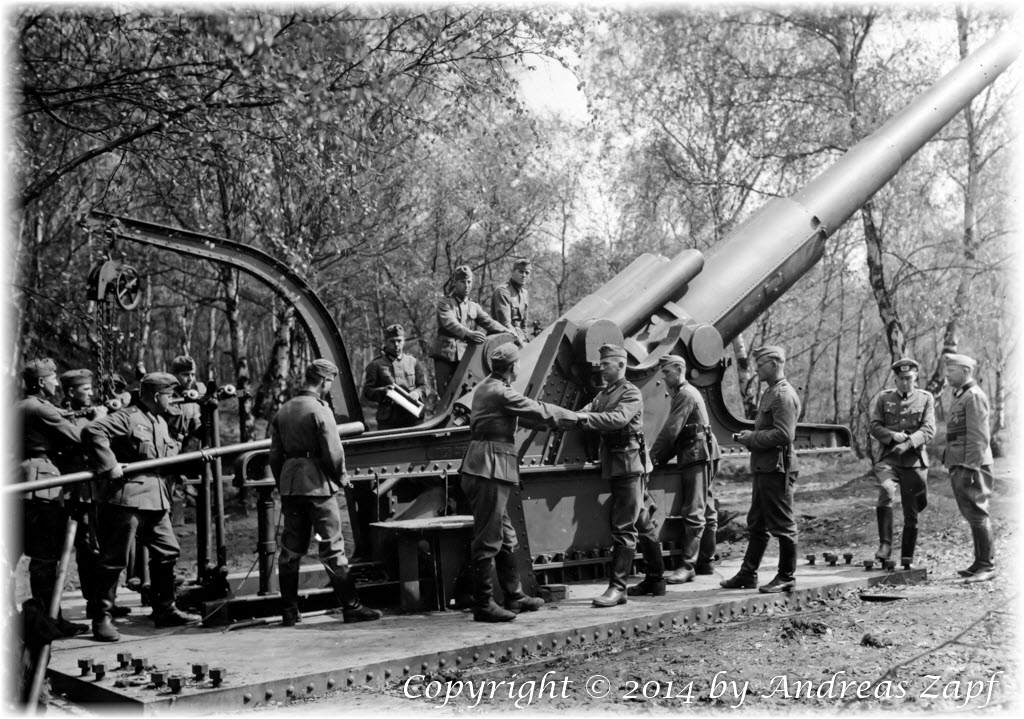 The photo above shows a drill-exercise in April 1940 so I have taken it a bit out of its historical context but it provides a good view of the gun itself and the crew operating it.