When we found my grandfathers photos, they were neatly filed in envelopes – some of them with, others without a caption. Some of those pre-war photos I have used in my introduction pages (Childhood & Adolescence, The Boy growing up and Military Service). But there are five that I wanted to share which did not fit in any of those pages.

The first one is a photo of a German heavy cruiser, the Admiral Graf Spee. The photo – a partial shot of her main superstructure – is probably a genuine photos taken by my grandfather himself (as opposed to some of the others which possibly are purchased or collected photos).

The Graf Spee was named after Maximilian Reichsgraf von Spree, a German Vice Admiral in World War I. She became the flag ship of the German Navy in 1934.

Sent to the South Atlantic before the outbreak of hostilities in 1939, she was due to intercept and destroy allied merchant vessels in the region. On December 13, 1939, she engaged in a naval battle with three British ships, the HMS Exeter, also a heavy cruiser, and the HMS Ajax and HMS Achilles, two Light Cruisers. The battle was a draw – the Graf Spee damaged two of the Royal Navy’s ships, the Exeter and the Ajax, but had been hit several times in return.

She withdrew into the port of Montevideo where the crew was to treat the wounded, bury the dead and repair the ship. Uruguay, however, was a neutral country and as such, the Graf Spee would either be interned or scuttled unless she left port in due time. Her Commanding Officer, Kapitän zur See Hans Langsdorff, decided to not further risk the lifes of his crew in a battle with what he assumed to be a superior British force but sink her by hands of her own crew after having been forced to leave the port of Montevideo on December 17, 1939. He committed suicide on December 20, 1939. 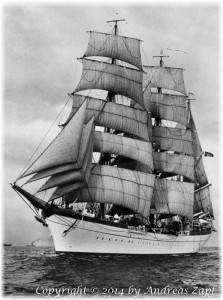 The next photo – probably a purchased one – is showing the Sailing Ship “Horst Wessel”, the German Navy’s Training ship.

While with the German Navy, her homeport was Kiel, today – with the USGC – it is New London, CT.

I just wonder if and how many of the cadets training on her today know about her history. In 2011, she returned to Germany, visiting the port of Hamburg.

The City of Bremen

The next three photos are a bit difficult. The first one is clearly a “purchase” – probably a postcard or alike. 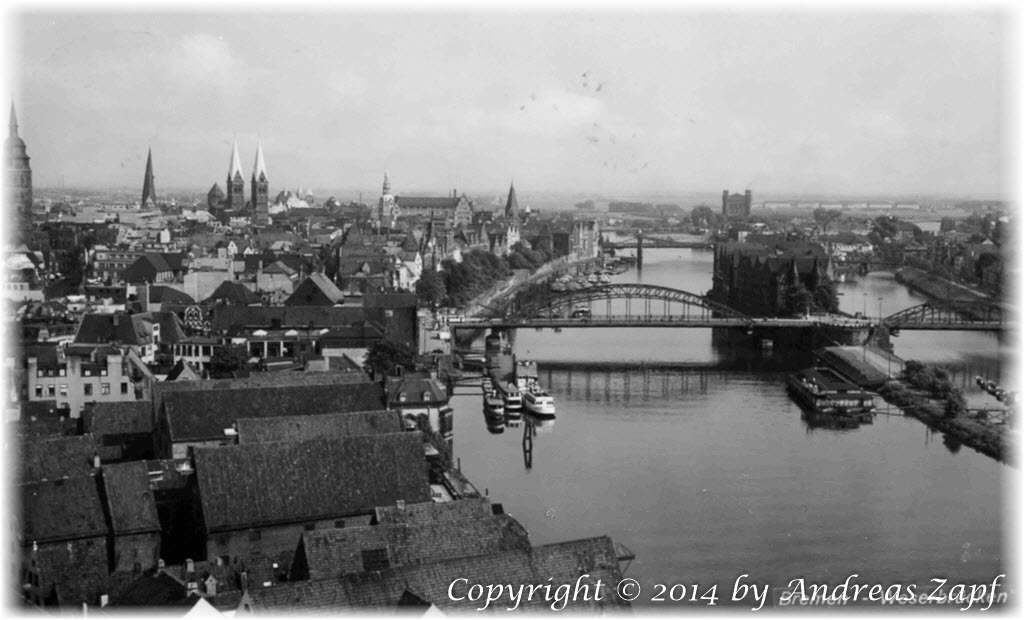 It shows the bridges over the river Weser in the city of Bremen. I am showing it, because Bremen – like many other major cities in Germany – was heavily destroyed in World War II and pre-war photos showing the original skyline should not be hidden.

Ships in the Port of Bremen

The other two photos are showing ships, I currently assume they have been taken in Wesermünde, today’s Bremerhaven. I am currently awaiting confirmation but following the captions my grandfather put on the photos, both ships will be writing history later in the war.

The first photo actually shows a set of ships, and the interesting one(s) are on the left. I currently think, this is actually two ships, close together.

The name on the front one reads Walter Rau. She was a whaling factory ship before the war and would end up in the Baltic Sea in 1945 where she would become part of Operation Hannibal, a German naval operation to evacuate German troops and civilians from East Prussia and Courland.

In January  1945, the Walter Rau will be on a passage from  Gdingen (in 1945: Gotenhafen), today Gdynia in Poland to Germany, possibly Flensburg. While still on sea, they will become aware of an event that will have happened only two days after they left Gotenhafen. Which brings us to the last of the photos. 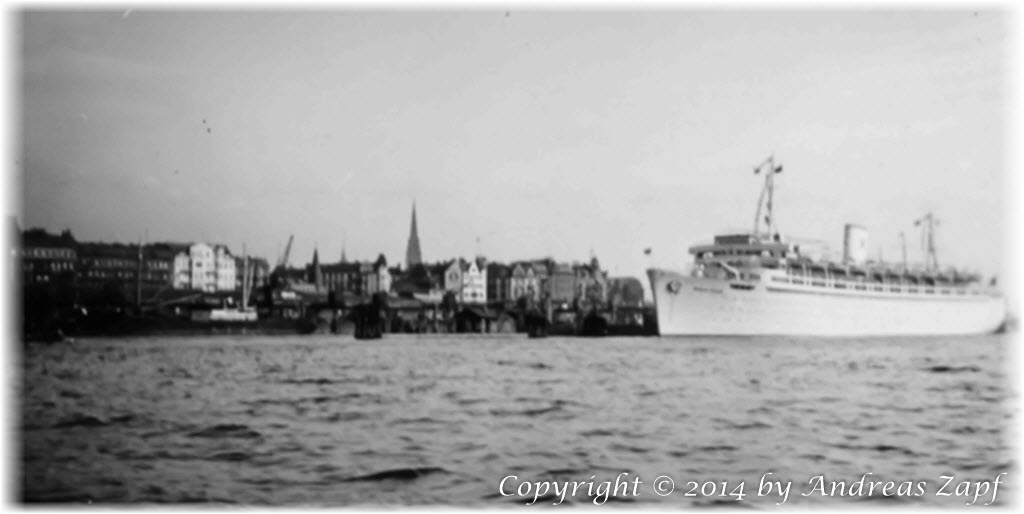 The white cruise liner on the photo is the Wilhelm Gustloff. She served as a cruise ship before the war and became a hospital ship first, later was used as floating barracks in Gotenhafen.

She left the port of Gotenhafen on January 30, 1945. On her decks a large number of refugees trying to get out of East Prussia in those last weeks of the war. As a cruise ship, she was designed to carry roughly 1.400 passengers and 400 crew members – around 1.800 people. On that cold day in January 1945, an estimated 10.500 children, women and men were on board…

As a ship armed with anti-aircraft guns and following the rules of war, Germany did not mark her as a hospital ship (which may or may not have saved her). Unmarked, as she was, she was a legitimate target for the captain and crew of the Soviet submarine S-13. A salvo of three torpedoes put her on the bottom of the sea.

Her sinking is probably the largest single loss of life in a maritime disaster. The exact numbers are unknown because in the turmoil of the last days of the Reich, an exact recording of those that boarded and those that survived is not granted. It is estimated that of those 10.500 assumed to have boarded her in Gotenhafen,  more than 9.000 found an icy grave in the Baltic Sea.

This entry was posted in Background Narrative (General), General. Bookmark the permalink.